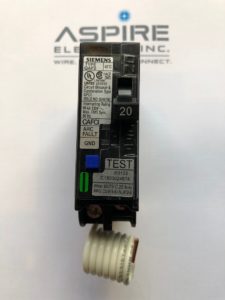 Electricity in your home is supposed to go on a circuit from the wires to the electrical device on a hot wire, where it powers the device. The electrons then go back to the ground on a neutral wire. The majority of the time, this happens perfectly, but when electricity goes where it’s not supposed to, you have what is known as a short circuit.

Which Fault Is It? There are a couple of kinds of short circuits. The first one is a ground fault, in which the current in the hot wire makes accidental contact with the ground. The danger of a ground fault is electrical shock. A Ground Fault Circuit Interrupter adds protection against ground faults.

The other kind of short circuit is called an arc fault. Where corroded or damaged wires or loose wire connections cause sparking or arcing. The electricity actually jumps from one place to another causing a spark. If there is combustionable material nearby, a fire could start. The danger of an arc fault is fire.

What’s At Fault? An arc fault occurs when wires are damaged in some ways. This can happen from something simple, like a piece of furniture that gets pushed up against a plug in the outlet breaking . Wires can also be compromised by animals, age, and corrosion. We’ve also seen damage caused by someone nailing to hang a picture on the wall.

Testing for Faults. An Arc Fault Circuit Breakers will send a test signal throughout your existing wiring in your home, specifically looking for potential electrical fires. It will shut down the whole circuit before an electrical fire starts.

Since 1999, the National Electrical Code has required arc fault circuit breakers in all new homes. If your home was built before that, talk about updating , or a home inspection. Don’t let a faulty wire put your home in danger. Call us today!